By Eleonora BaldwinMay 7, 2019No Comments

Most Rome restaurants serve local cuisine. A number of them are below average, some are good, a handful are stellar. But after the nth plate of carbonara even my 50% native Roman palate begs for variety.

So when my friend Elyssa uttered the word “Mexican” I was already out the door, psyched at the thought of tacos. This was going to be the last chance I was giving Rome, after many, many disappointments.

It’s a known fact that the Rome expat community hasn’t had much to cheer about, particularly if before moving to the Eternal City they used to live in cities brimming with international cuisine options. Like them, I––ever the optimist––have continued wandering the streets of Rome in search of decent non-Roman, non-Italian food. The good news is that a recent surge in variety and international flavors has brought smiles back to our faces.

If you too need a little change and want to take a passeggiata from your comfort zone, here are 7 non-Italian cuisine restaurants in Rome we highly recommend.

Just what Rome was missing: a true Mexican restaurant serving high quality street food. Notice I did not mention Tex-Mex (what many locals erroneously associate with Mexican food). The dishes served here taste exactly like they do in Puerto Escondido, birthplace of chef Patricio Sandoval. Before even placing your order, a chips, salsa and guacamole land at your table. Wash yours down with a progressive twist on the margarita made instead with jalapeño infused tequila, Licor 43, lime juice, gin soaked avocado foam and pepper. The “Patricio” Margarita instead uses mezcal and coats the glass with chili powder mixed with salt. I went for a Dos Equis beer with a lime wedge pushed down the neck of the bottle, just like I used to have it when I sojourned in Quintana Roo.
The menu features tacos, burritos, enchiladas, tamales, tostadas, quesadillas and huaraches, plus a good choice of sides and specials. Think, slow-roasted cochinita pibil served with white rice, black beans, and pico de gallo. The tacos al pastor, filled with marinated pork meat, pineapple, onion, lime, green salsa and measured amount of cilantro (I’m part of the genetic half of the planet averse to it, yet in this dish it was percfectly balanced) were nothing short of perfect. I would also highly recommend the mushroom tacos, as well as the delectable shrimp tacos, added with red onion, garlic, chipotle, avocado and coaxed in the pan for a few seconds with fondant butter. Avoid going crazy and leave room for dessert, especially if the dulce de leche quesadilla spiked with cheese is on the menu that day. Though portions are contained, the quality of ingredients and the skilled staff in the kitchen more than make up for it. Contemporary Mexican art on the walls, great music, a fun bar situation and a mezcal list with 20 entries complete the setting.
Mexcaleria Callejon – Via dei Filippini, 4 – Tel. +39 06 88796387 – Facebook – Open Mon-Sat noon to midnight

The perfect burrito at Mezcaleria Callejon in Rome

The bar at Mezcaleria Callejon in Rome

Brazilian saudade meets the Land of the Rising Sun. One of the latest culinary trends in fusion cuisines entangles the flavors and cultures of Japan and Brazil. Behind this is a very interesting history. At the beginning of 1900’s, after months of navigation, 165 migrant families from the Far East arrived to Santos, the port of São Paulo, looking for a better life. After WWI, a lot more families moved to Brazil thanks to Japanese incentives for international migration and after the closing of North American borders. Today, a century later, Brazil has one of the biggest established Japanese communities (over 1.5 million citizens). The Japanese people brought with them a rich baggage of sushi culture, which easily adapted to the country’s tropical ingredients. The mix is hard to categorize but incredibly likable. Proof of this is that Temakinho, besides restaurants in London and Spain, has fine branches in Milan and three in Rome. Furthermore, this is the first restaurant chain to obtain official “Friend of the Sea” certification, and using only sustainable, top quality seafood products. Don’t overlook the fried camarão, sushi rolls (don’t miss the Rio Banana), temaki and tartares. Fine caipirinha is prepared using the best Brazilian cachaça, sugar, lime and fresh fruit pulp. The food pairs well with Brazilian beers such as Brahma, Skol, Bohemia and Xingu, and fruit smoothies for non-drinkers.
Monti Via dei Serpenti, 16 – Tel. +39 06 42016656 ~ Borgo Borgo Angelico, 30 – Tel. +39 06 69369322 ~ La Rinascente Via del Tritone, 62 – Tel. +39 06 87916660 – Open daily lunch and dinner

This Lebanese-Egyptian cafeteria-style eatery near the Church of Santa Maria Maggiore is clean, affordable and absolutely delicious. There are always prime quality meats roasting on the doner kebab and the kitchen prepares sensational falafel, kofta (stuffed grape leaves) tabouleh, hummus, rice with slivered almonds, stews served with rice and cous cous. The house special is the shawarma, sliced grilled lamb, yogurt sauce, and vegetables wrapped in a pita. Big portions and very kind service. Via Merulana, 271 – Tel. +39 06 4881216 – No website – Open daily 11:00 am to midnight

Hummus and felafel at Shawarma Station in Rome

Forget the flamboyant decor with red lanterns, jammed tables, ubiquitous spring rolls and fried rice. Lin is not your average Chinese restaurant in Rome. Authentic traditional cuisine, in particular typical dishes from south-eastern China, are characterized by a mix of local ingredients and Asian spices with quick cooking methods that balance harmony and flavors. On the menu are just a handful of dishes, including very good meat or seafood dumplings, wan tun and other soups, hand-stretched egg and soy noodles, and perhaps the best pork belly in the universe: seared on the griddle and then slow-stewed in rice wine, honey, star anise, and cinnamon, and which comes served with white rice. A phenomenal entrée for balance and contrast between the slightly crisp rind and the juicy and tender meat: pure pleasure that alone is worth the trip. Although the spicy boneless fried duck with star anise, cinnamon, clove, fennel seeds and pepper, served with a puree of mashed Taro and pickled daikon is equally tantalizing. When in season, leave a little space for the fried softshell crab served on a bed of puréed sweet potato.
Via Basento 70-76 – Tel. +39 06 8546270 – www.ristorante-lin.it – Open Mon-Sat for lunch and dinner, Sunday only for dinner

Ristorante Lin in Rome, not your average Chinese restaurant

The pork belly at Ristorante Lin in Rome

This contemporary Korean restaurant offers authentic dishes and creative twists. Galbi was born in 2015 from the driving passion for Korean cuisine and the experience of Stefano Chung and Deuk Uoo Ferretti Min, owners of their two respective restaurants Gainn and Apuleius. The idea was to create a place in the heart of Rome entirely dedicated to Korean cuisine with a high quality offer. The barbecue is stoked with oak coals, the seafood is super-fresh, the kimchi is top-notch, and the traditional Korean barbecue meats are marinated using ancient recipes and ages old methods. The menu also includes specialty noodles, rice dishes, meat and fish specials, and preparations suitable for vegetarians. The well-lit, modern and minimalist ambiance enriched by the large wood cocktail bar counter, plush red armchairs, large and elegant arches are just some of the elements that make Galbi the ideal location for an informal business lunch, an evening among friends, or the setting for a romantic dinner.
Via Cremera, 21 – Tel. +39 06 8842132 – www.galbiroma.it – Open lunch and dinner Mon-Sat

Korean barbecue at Galbi in Rome

Gourmet burgers have been the trend in Italy for a decade. Unfortunately none actually capture the essence of a proper patty That’s until the TBSP project came along in 2015, with its initial two fast food joints (one in Ponte Milvio and the other at the Testaccio market) and more recently the restaurant in the San Giovanni neighborhood. Aside from burgers made with three cuts of meat and just the right amount of fat, think also juicy pulled pork, sticky spare ribs, real deal barbecue sauce and craft beer, and then some. The Barbecue Smoke Project––what the acronym stands for––is the brainchild of Fabio Galli, third generation of a family of Roman butchers, and Claudio Nani, pit master specialized in American BBQ specialties, like brisket, burgers, pork and ribs. Much more than a burger joint, TBSP Restaurant offers traditional Texan and southern American barbecue. Authentic smoke BBQ delivers fine “low ‘n’ slow” cooked quality to pork meats but the menu features grilled specialties like beef pastrami, dry aged New York strip steak, and grilled tomahawk steaks, all served with a choice of sweet potato fries, cole slaw and salad. Last, but not least, also hailing directly from the United States is a new concept in the Roman restaurant scene: BYOB, where customers can bring their own bottle of wine from home, served by the staff in decanters in exchange for a reasonable cork fee.
Via Gallia, 83 – Tel. + 39 06 81157225 – www.tbsp.it – Open daily from 6:30 pm to 1:00 am

good burgers at TBSP in Rome

At the helm of this delicious eatery in Ostiense is a Calabrian chef and a Danish baker. For the past 5 years, Sofie and Domenico hosted Rome’s coolest supper club at their home. In December 2018 the duo has finally opened their restaurant just beyond Piramide and Testaccio: The dining room is bright, open and minimalist, tables well-spaced and the room is decorated with simple elegance. The menu features an abundance of vegetarian options and interesting non-Italian signature dishes, all created with organic ingredients sourced at the nearby farmer’s markets and biologico outlets like Zolle and Bernabei. Domenico worked for several years at the American Academy of Rome in the Sustainable Food Project, which was founded by Alice Waters. His cooking pairs healthy, seasonal, local and self-foraged ingredients and comes through beautifully in dishes like hummus with yogurt, za’atar oil, topped with roasted baby turnips and zucchini. Or the droolworthy potato gnocchi filled with mozzarella cradled in a cream of peas and mint, and delights like the mind-blowing chicken salad which layers grilled chicken breast with galletti mushrooms served on a purée of fava beans. Be sure to leave room for dessert and always order the homemade sourdough bread and homemade Danish butter to start.
Via Giovanni da Empoli, 37 – Tel. +39 06 87725679 – marigoldroma.com – Opening hours: Tuesday – Thursday 8am – 5pm; Friday 8am – 11pm; Saturday 9am – 11pm; Sunday 9am – 5pm; Monday Closed 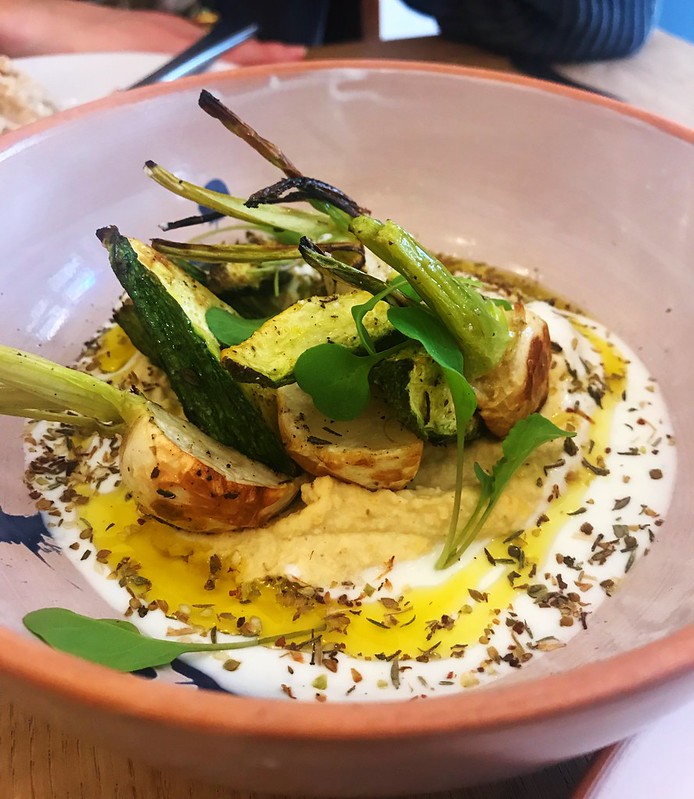 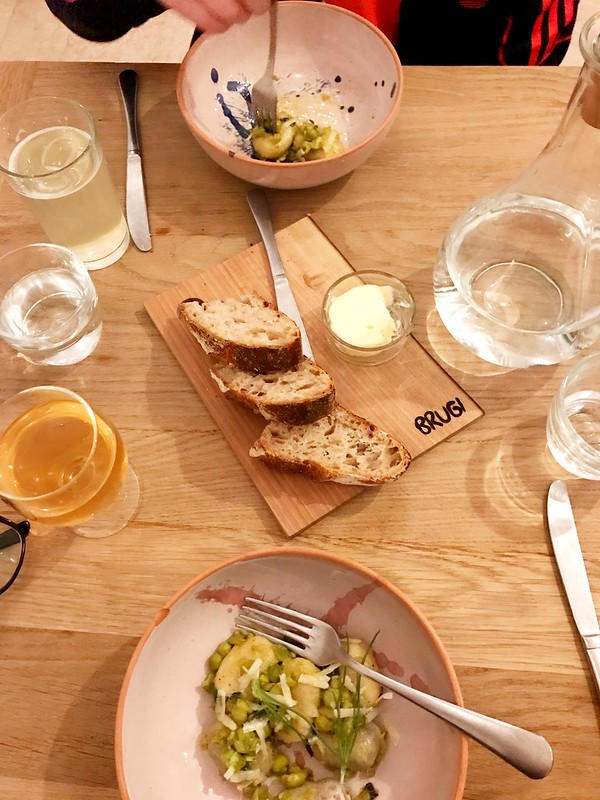