“Marco Roscioli forno ai Chiavari dal 1824” – the playful script dances across the wide glass storefront, above the archway and on the building sign at 34 Via dei Chiavari, a few blocks from the historic Campo de’ Fiori market. Shelves chock-full of moist apple cakes, wild cherry crostate and crumbly biscotti lure passers-by. Golden, freshly baked bread and crisp Roman style pizza sold by the slice are the real treasures. Protected safely behind the serving counters, flat, round and square loaves of goodness are displayed like art. Six foot oblong slabs of bubbly pizza crust are topped with mozzarella, tomato sauce and other delights, glistening with extra virgin olive oil and waiting to be sliced, weighed, then devoured.

Known simply as the forno, Italian for ‘oven’, the bakery first opened its doors in 1824. More than a century later, Marco Roscioli, an immigrant from the region of Le Marche in central-eastern Italy, bought the shop and renamed it “Forno Marco Roscioli”. It was February 1972. Today the name of the business is Antico Forno Roscioli.

Bread-making is a Roscioli family tradition. Marco apprenticed at his Uncles’ forno in Rome from a young age, until he saved enough cash to start his own endeavor. Heartfelt passion, devotion and an emphasis on quality ingredients from start to finish are the keys to Roscioli’s continued success. As masters of the craft of bread and pizza making, Roscioli are now among the top and trend-setting Roman bakers.

Marco’s two sons, Alessandro and Pierluigi, grew up in and around the forno, infused by Marco’s love and dedication. His eldest son, Alessandro reflects on his childhood memories. “I remember casalinghe (housewives) arriving here with silver trays lined with raw chicken and potatoes brushed with oil, and platters of simple yeast dough. We collected a small service fee for the use of our electric ovens. Back then, home ranges were not large nor powerful enough for the job at hand.”
This was commonplace in Rome until the 1980s.

Pierluigi runs the forno while Alessandro manages Salumeria Roscioli, the deli/restaurant arm of the Roscioli family business. Some mornings Marco and his wife, Anna, work the cash register at the forno, Marco no longer makes bread. The reigns lie in the hands of Pierluigi now.

Pierluigi’s day starts before sunrise working alongside the able bakers, Renato and Luigi. They stretch the slowly risen dough into various shapes and sizes, and place the elastic forms on sheets. Nearly 100 large loaves of authentic pane di Lariano (named after Lariano, a town south of Rome) are swiftly shoveled into the large electric oven to brown for the next hour. The intoxicating, nutty aroma wafts into the Campo de’ Fiori area, beckoning to early risers.

Over the past 10 years there has been an increase in the demand for authentic regional breads. With improved lievito madre (natural starter) resulting in longer shelf life, traditional large, Southern Italian bread forms are reappearing on bakers’ shelves alongside ancient and organic grain varieties.

Enter this buzzing bread mecca and mingle with regulars lined up to order loaves of crusty casareccio (homestyle bread made with white flour), rich pane di Lariano and robust pane di segale bio (organic rye bread) while snacking on crisp pizza al taglio (pizza by the slice). Counter-staff dressed in aprons, slice fresh-from-the-oven pizza bianca (no topping) handing to impatient children while their parents select bread to go. Pizza bianca is found all over Italy but only called by this name in Rome where it was created. Crisp, salty and chewy, this is Rome’s original street food. It is best eaten while piping hot. And stuffed with silky mortadella. Or prosciutto and fresh figs, when in season.

Each day, dozens of tall, crinkly brown paper bags stuffed with rosette (hollow rose-like rolls typical of Rome) and pane di kamut bio (organic kamut bread) and other loaves, are swept away by Roscioli’s delivery crew, destined for the best restaurants and dining establishments in the city.

Pane is a staple of Italian culture and diet.
No Italian meal is complete without it.

All Roscioli bread and pizza is baked in large electric ovens following Roman traditional methods after having risen between 8 to 12 hours. Bread is baked in three daily shifts: early morning, midday, and 5 p.m.; while pizza is baked all day long. Regional desserts and cakes, torte, crostate, pies, holiday sweets and biscotti follow the calendar and popular demand.

The best time to visit Antico Forno Roscioli is either early in the morning, before the crowds arrive from the nearby market, and at 2 p.m., when all the locals are done with their grocery rounds and are home, having lunch. Or, for local color, when school lets out (4:30 p.m) and the children roll in, hungry for their afternoon merenda snack.

My ever evolving kitchen 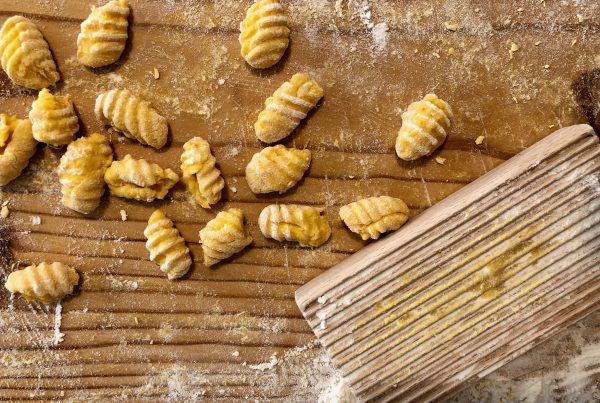