What Fruits and Vegetables are in Season in April in Italy

With this month’s last installment, we have come full circle and completed an entire year of what fruit and vegetables are in season, month by month. The arrival of April in the Bel Paese heralds new produce, and spring time fruit and vegetables grace the stalls of outdoor markets all over Italy. Let’s take a look at a few standout examples. 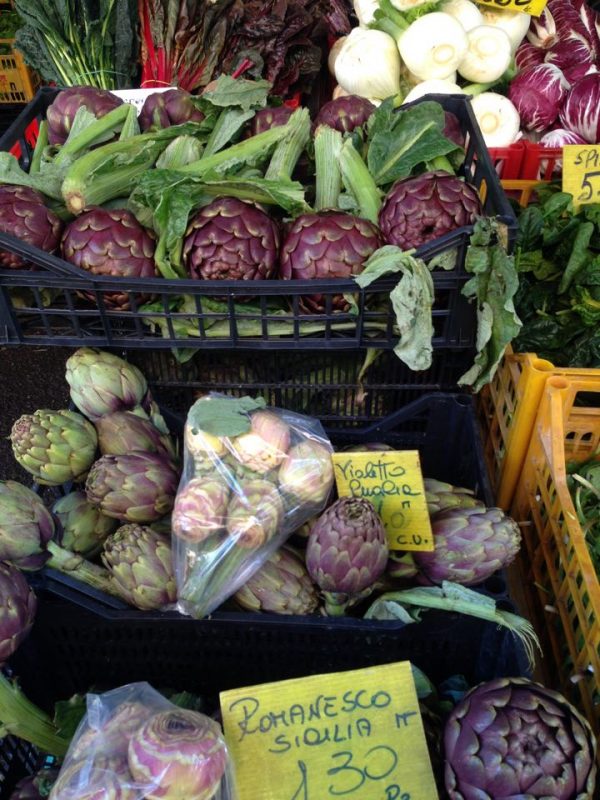 “Carciofi” are in and this is the time to enjoy them! The sensational Roman Mammole (an equivalent of the globe artichoke) are locally employed in a large number of recipes – deep fried alla giudia; braised with mint and garlic alla romana; sliced raw in salad and tossed with shaved Parmigiano, olive oil and lemon juice; quartered, battered and fried along with chicken; used in springtime vignarola or sautéed with offal. Artichokes are in season between February and May.

Strong, peppery flavored spiky leaves, with a slight ‘bite’ to them: rocket or arugula, also known as rucola or rughetta is a very popular Italian green. Besides in salads to add some perk, also toss arugula in pasta dishes, over pizza, on top of freshly-grilled meats.

Available from April to early June, asparagus are considered one of the delicacies of the vegetable world, with a very distinct, intense savory flavor. The very slender wild asparagus (asparagi selvatici) are the best in terms of flavor, but this kind of asparagus is not cultivated, and can only be foraged in unkept fields and forest floor. Asparagus can be purple, green or white, but the latter is a variety that’s grown in Italy’s northern regions, particularly in the Veneto, where the climate is colder. All types of asparagus pack a nutritional punch, with high levels of vitamin A and C, potassium, iron and calcium, and are a potent diuretic. 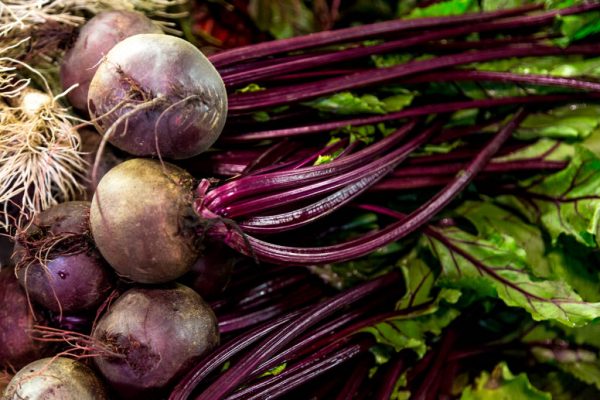 After being a popular salad ingredient in the ’70s beetroot is now enjoying somewhat of a comeback. Thanks to its earthy, rich yet sweet flavor and distinctive vibrant color, it lends itself to a variety of both sweet and savory preparations. Available in Italy between August and May, locals also use the beet greens sauteéd with olive olive and garlic for a delicious vitamin boost!

Knobby, odd-shaped celeriac is recognizeable on the market stall as the weird root with rhino-tough skin. This root vegetable is available year round but is at its best from September to May. The surprise is the subtle, celery-like flavor, with nutty overtones. Try it as mash, in big-flavored, slow-cooked stews, or in its classic form, and as they do en France, as a remoulade.

Sedano, as we call it in Italian, is available all year round, but the season here runs from September to late May. The tougher outer stalks are the best to cook with, while the inner, more tender stalks are better for eating raw. The leafy tops are a great addition to salads. Celery is essential in a soffritto, or mirepoix, which is the carrot, onion, celery mix that is the mainstay of many Italian dishes.

The first eggplants (or aubergines) are begining to make their appearance on Italian market stalls. Whether slender, speckled and striped, or bulbous, glossy, deep purple zepplin-like, Melanzane are a staple in southern Italian cuisine. Eggplant’s mildly smokey flavor and flesh that’s spongey when raw but soft and meaty once cooked, lends itself to a large number of very popular Mediterranean dishes, like Eggplant Parmigiana for example, in which the aubergine slices are fried and then layered with tomato sauce, cubed mozzarella and fresh basil, dusted with lots of grated Parmigiano and then baked in the oven.

The first fava beans – also known as broad beans – are starting to appear, and we will enjoy them until late June, podded and shelled along with crumbly chunks of Pecorino, or braised with other spring vegetables in vignarola. BFava beans are some of the most ancient plants in cultivation and also among the easiest to grow, recorded as part of the eastern Mediterranean diet since around 6,000 BC. They are still often grown as a cover crop to prevent erosion, and also to help other crops, since as a legume, they fix nitrogen in the soil. That is why winemakers often plant fava beans in between rows in their vineyards.

Finocchio bulbs, when eaten raw, possess a crisp texture and a quite assertive and anisseedy flavor. On the other hand, when cooked, fennel bulbs taste sweeter and the texture is softer and almost creamy. Normally available May to December, this year’s mild weather brought us fennels earlier. The feathery tops of the fennel bulb are a welcome aromatic addition to Sicilian pasta dishes and other Mediterranean preparations.

Although more closely related to garlic, leeks taste more like a mild onion – but with a hint of sweetness. Available all year round, leeks are at their best from October to May. They are very versatile and work well cooked in various recipes or as a side dish. Julienned and fried they make a sensational topping on vegetarian pasta or salad.

There are several types of mint, each with its own subtle difference in flavor and appearance. The most popular type is spearmint, with its pointy, serrated leaves and a familiar refreshing taste. Peppermint has longer, darker leaves and a stronger flavor and is popular in desserts and confectionary. In Italy, and Rome in particular, mentuccia (a wild-growing variety known as calamint, nepetella, or Emperor’s mint) is commonly added to braised artichokes, frittata or tripe.

Fresh peas are at their peak between late April and November. As is the case with all types of legume, they are best eaten just-picked.

The appearance of new potatoes (patate novelle) on Italian market stalls in April heralds the arrival of spring. Did you know that unwashed potatoes last longer, as the dirt protects them from bruising and general deterioration?

Available March to September, ravanelli (radishes) have distinctly peppery flavor and a crisp, crunchy texture. Among the most popular varieties are the small, cherry-sized variety which have a red skin and white flesh. I love them sliced in mixed salads, or eaten simply smeared with butter and sprinkled with sea salt.

A European plant of the dandelion family, salsify is also known as the oyster plant because of its oystery taste when cooked. Available from August to May, this root is similar in appearance to a long, thin tapered parsnip, with creamy white flesh and a thick brown skin.

The bitter, earthy flavor of spinaci is distinctive – you either love it or hate it – and complements particularly well dairy preparations and eggs. Available between April and December, the milder, young leaves can be eaten raw in salad, while the older ones are usually cooked. Spinach has one of the shortest cooking times of all vegetables, so watch out. Also, it reduces drastically in volume during cooking!

Spring flat beans locally called Taccole are legumes, more specifically a variety of pea which is normally eaten whole in its pod while still unripe. The flavor is milder and sweeter than the average garden pea, and contains double the amount of Calcium. In season between late April and August, Italians blanche them and then cook them with onions and tomato sauce until tender.

At their best between February to May, lemons are one of the most versatile fruits around, and contain high levels of Vitamin C. The best lemons for juicing or using for wedges are those with a smooth, thin skin, while the best for zesting are those with thicker, knobbly skin, whose fruits tend to be larger. Always buy unwaxed lemons (shops should state this clearly), especially if you’ll be using them for zesting. If you can’t find unwaxed produce, scrub the lemons thoroughly with bicarbonate of soda before zesting. Tip: to extract the maximum amount of juice, make sure lemons are at room temperature.

Locally called nespole, loquats grow in clusters on evergreen trees. The loquat fruits are oval, 1-inch long, with a smooth or downy, orange skin. The succulent, tangy flesh is orange and sweet and contains 3-4 large, slippery seeds at the core. The thin skin can be peeled off easily if the fruit is ripe, and the flavor is a mixture of peach, citrus and mild mango. 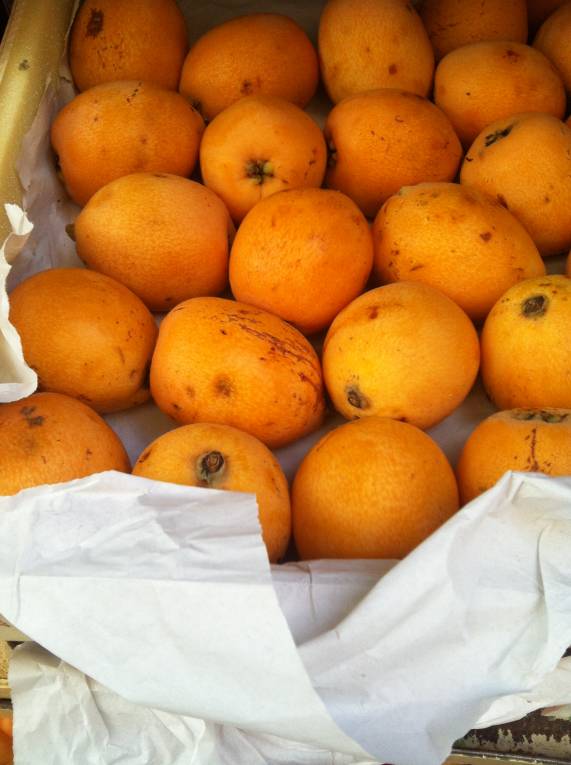 Pomegranates have always been highly prized for their flavor, but their recent emergence as a highly nutritious superfood, packed with antioxidant vitamins, has made them even more popular. Pomegranates appear in Italian markets in November through June in their shiny orbs, blushed with red or yellow. Inside, scores of edible tiny white seeds are held in jewel-like ruby sacs of sweet, juicy flesh. The sacs themselves are packed tightly in a bitter, pale yellow pith, which is best discarded.

Technically rhubarb is a vegetable but its thick, fleshy and watermelon-colored stalks are treated as a fruit. Tart flavored, rhubarb should be cooked with plenty of sugar, and is perfect in pies with both ginger and strawberries. Available in Italy between January and July. Note: Rhubarb leaves contain oxalic acid, which is poison, so should never be eaten; so be sure to cut them off and discard! 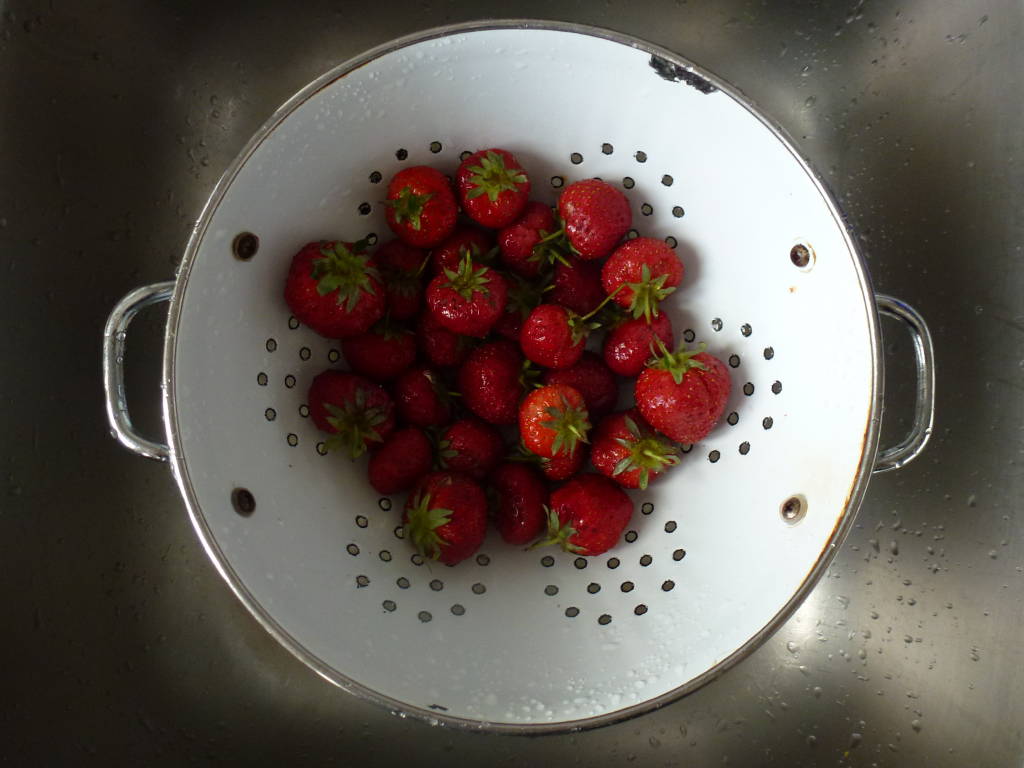 Hooray for strawberries! One of the healthiest and most popular fruits in nature – fragole – strawberries actually belong to the rose family and grow in more than different species that differ in flavor, size and texture. What stays the same is the same characteristic heart-shaped, red flesh and seeded coat many are so fond of. Wild strawberries have a long history and have been enjoyed since the Roman era. Allegedly, newly weds were once entitled to strawberries eaten with sour cream as a wedding breakfast, believing them to be an aphrodisiac.

What fruits and vegetables are in season in April where you live? 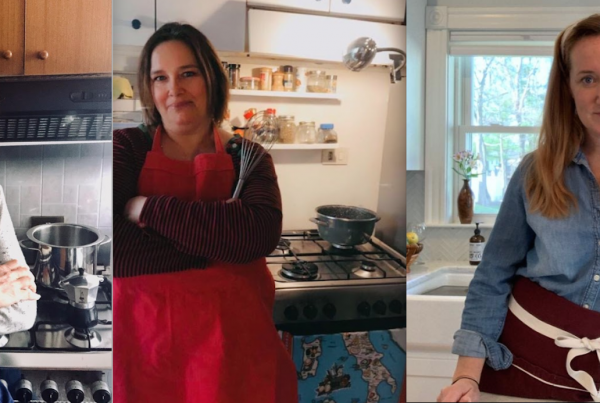 Resolving to remember the silver linings of 2020